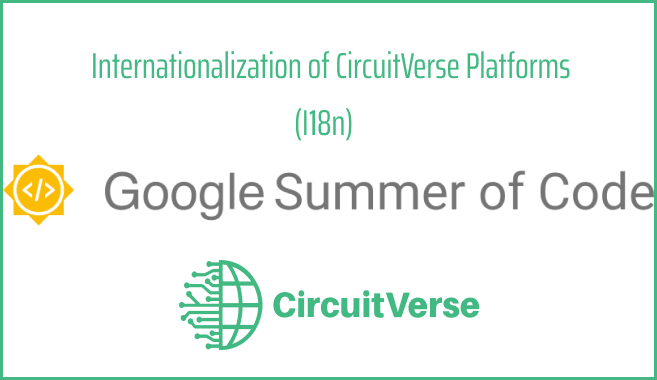 This blog report summarizes my work which was done during the first phase of Google Summer of Code 2021 coding period. First phase of GSoC'2021 was started from June 7 and officially end on July 12.

Internationalization mainly aims at creating I18n architecture for the CircuitVerse platforms in order to localize or translate them into multiple languages.

During GSoC my aim is to create I18n architecture for 5 major technologies used in different CircuitVerse platforms.

In this week, I started setting up fresh repositories for Rails codebase along with linters and my favourite extension RuboCop for Rails.

In my 2nd week, I started preparing for a bunch of localization rules so that consistency in I18n is maintained throughout the codebase by me as well as by future contributors.

For this task, I had to take proper overview of the codebase and design module specific rules for running quality I18n processes throughout the module.

In this week, I worked on localization process of CV modules and other aspects of project.

4th week consisted of working on major aspects such as library, documentation and modules of project.

In my final week, I started working on Simulator and Mobile App.

All the commitments I have made for phase-1 of the coding period had been achieved. Instead of CircuitVerse Docs, I have started my work with Mobile App in parallel and I18n for Docs will be done in the ending weeks as it becomes ready for I18n.

I have also created my own blog covering my GSoC journey as well as my preparation during pre-GSoC, so that future GSoC aspirants can receive an advantage from it .

I would like to thank the CircuitVerse community for providing me this amazing opportunity. Open Source contributions at CircuitVerse helped me a lot in enhancing my coding skills and soft skills as well.

Special thanks to my mentors Aboobacker MK and Nitish Aggarwal. It was a great learning experience for me to work with them during phase one. Looking forward for an exciting phase two!